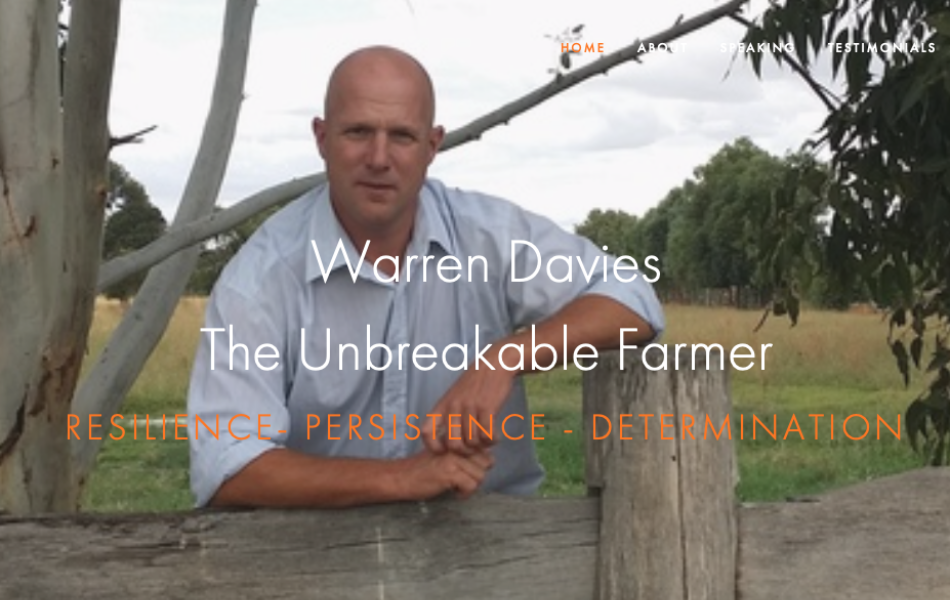 Warren Davies is the Unbreakable Farmer, this interview has been broken into two parts. Warren talks about farming today and the mental health crisis and suicide rate amongst Australian farmers.

Resilience, Persistence and Determination are the words to describe Warren Davies.

Born and bred in the eastern suburbs of Melbourne, Warren was the son of small business owners.

A leader throughout his Primary School years, this confidence was eroded once entering Secondary School, where he was subjected to bullying and not fitting in. His academic achievement began a downward spiral. This is where his skill of Resilience was developed a skill that would be called upon time and time again in future years.
In 1982 His family made the massive decision to move to the country and pursue his father’s dream of becoming a farmer. This gave Warren an opportunity to reinvent himself. A direction, a career path: he was going to be a Farmer!
Mentored by one of the best farmers in the district, Warren honed his skills and, by the age of 22, he had purchased his first farm.

The next sixteen years were to be defining years for him.
The harsh reality of being a farmer soon became evident: high-interest rates, low commodity prices, flood and drought; all having an impact, but most significantly, was that on his mental health. These events all tested his Resilience, Persistence and Determination and had a massive impact on his young family, relationships and finances all culminating with the decision to basically having to walk off the farm.

Although with his skills, work was easy to find, managing large scale operations from Victoria to South Australia, it wasn’t the same, he couldn’t settle, he assumed that he had lost his identity because not only was the farm his career, it was his home, his life! In his eyes he had failed and carried the guilt of failing as a husband and father.

Being an avid reader of books he searched for a better way, he began the journey of piecing back together his life, but the road has been long, through his Resilience, Persistence and Determination, he now imparts his skills and pays forward his unique stories, their moral relevant to all ages, from the country to the city, a farmer or the CEO of a large corporation.

There is more to this farmer than meets the eye. Listen in as Kim and Cyndi talk to The Unbreakable farmer about the important work he is doing now and how his life has led him to what he does today.
www.theunbreakablefarmer.com.au
beyondblue.org.au
lifeline.org.au
Lifeline 131114
Lovemeloveyou.org.au